It appears that parts of Victoria were inhabited for at least 40,000 years before settlers came into the area introducing new land-use régimes such as grazing, timber harvesting, agriculture and mining. This history of human interaction with the land has left a rich legacy of sites and places that reveal often unrecorded aspects of human habitation.

Places of traditional significance for Aboriginal people and other areas are highly valued – and protected – for their aesthetic, historical, social or landscape values that form part of our cultural history.

During the mid-nineteenth century, Central Victoria’s Box and Ironbark forests were exploited due to the expansion of agriculture, development of gold mining and urbanisation. The forests were stripped bare of trees to provide timber for underground mines, firewood for steam-driven machinery and charcoal for blacksmiths who were in high demand in the goldfields.

In the late 1870s the government proclaimed the forests as Timber Reserves and actively conserved them, repairing the damage and encouraging growth via a management system that included plantations, nurseries, thinning and royalties. By the late 1880s, the forests that grew back were heavily stocked and thinning began to produce sawlog-size trees.

Today, some forest areas are set aside as parks and reserves totalling 427,000 ha and 120,950 ha of state forest is available for timber harvesting but only 3.5 per cent of the area is available for timber production per year. Modern ecological forest management means multiple uses- timber production from these third generation trees is balanced with flora and fauna conservation, recreation and catchment protection. 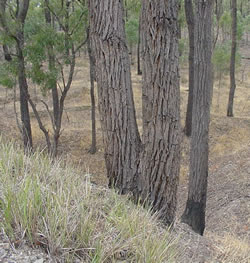